The Face of God’s Beloved

Last Friday!  It was such an amazing day for me.  I’m still not quite sure how to share it, but I’ll try.  I was welcomed into a world I have always had a big heart for, but where strangers are typically not allowed.  A world I’ve had the privilege of entering a time or two — but even then — I’ve merely stood, just inside the door, pretty much on the outside looking in.   Friday, I got to go inside, make new friends, and for the day, I felt like I belonged.  It meant the world to me.

Most people who know me know I have a passion for using my camera to stop time to show the beauty of a moment.  A moment of relationship.  Of emotion.  Of a beautiful soul peering through eyes that tell a story that might be missed in our distracted, pretentious world.

A couple of weeks ago, a gentleman named Marty contacted me about the death of one of my favorite friends and photo subjects, a homeless man named “Billy” (being the new name he gave himself sometime after I saw him last as Lite Earl Gossage, Jr.)   I immediately admired and appreciated Marty for going to the trouble to let me know.  He knew Billy because he often offers his computer services to help homeless people find family members.  He laughs when I call what he does “a ministry”.  But, it IS!  He had once helped Billy find me when Billy wanted to thank me for being kind to him; and so, Marty contacted me now to let me know of our friend’s passing.  He assured me that Billy was well taken care of and died gently.

I wanted to know more.  How does a homeless man die well taken care of and gently?  I inquired of Marty and learned:  a couple that spent many of their own years just like Billy, homeless and on the streets, took him in and cared for him until the very end.  Wow!  I thought of all the wonderful, Godly people I know, and wondered how many would bring a dying homeless man into their home so that he could die with dignity.  I wanted their story.  I wanted to know THEM.  Marty arranged it.  I was invited to visit them in their home near downtown, and thus, my surreal, delightful, eye-opening day with brand new friends!

Barbara and the furry little love of her life

Meet Mrs. Barbara and Sir Wayne.  I liked them instantly!  Wayne has a humble, sweet smile with sparkly eyes.  Barbara too has sparkly eyes and laughs easily.  She has a presence, however, that lets you know she can take care of herself.  It was beautiful.  She was tough.  She said she’s HAD to be.  Yet, put a cat or kitten anywhere near her (or Wayne for that matter), and you can find her heart on the floor in a heap of mush.   I’m not sure I’ve known anyone more sweetly authentic WITHOUT being one of those “in your face” types who think “authentic” means “I want to shock you with my differences”.   There was none of that.  Just a beautiful soul who has had a very hard life, but who accepts herself and doesn’t put on airs for anyone!  I loved that!   It made me feel comfortable being curious. What exactly is it like to have to actually live on the streets.   She wasn’t put off by my curiosity, and openly shared that part of her life with me.  So did Wayne.  She told me she could make the fastest, strongest lean-to out of bamboo sticks you ever saw… and also… to this day, she considers that life “her home”.  Where her people are.  What she knows.  But she admitted, it is a HARD life that one who hasn’t lived it can ever understand.  And she’s truly grateful to have a roof over her head and the comforts of home now.

Wayne!  A Painter.  He said he had no use for cats… but I think some would beg to differ 🙂

What I marveled at the most was how kind and compassionate that hard life had made her!  Some might have become “hard”, bitter.   Not Barbara.  She said she would never turn anyone away who needed a meal or a warm shower, “Because I’ve been there!”   Even more amazing, she knows:  Some will try to take advantage.  Some may even steal from her.  Some will end up crossing a line causing a negative effect on her home, and they will have to leave.   But, when they come back needing a meal or a warm shower, they are welcomed in again.  It’s so much like how God treats us! 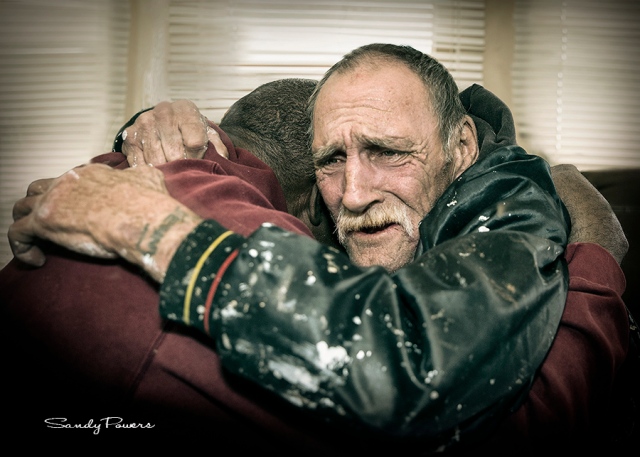 When I have my camera, I sometimes tell people, “Ok, snuggle up.”  That tells them to move a little closer to each other and lean in.  But with Wayne and his friend, Mike, when I told them to snuggle up, immediately there’s this!  A bear hug to end all bear hugs.  It was one of those times I laughed till I cried.

Another thing that touched me deeply was this.  Marty had told her that I was a strong Christian.  Course… as we know, that could mean anything.  Would I judge them?  Would I sit separately until I could figure out how to squeeze in a sermon on the error of their ways?   Sadly, I had the feeling that some Christians had already shown “Christ” to them that way.   So, understandably, they weren’t quite sure what to expect from me; yet, they warmly welcomed me into their lives and delightfully showed me their real, authentic selves.  The result was a day where we laughed so hard at times there were tears, and instead of a lack of trust, there was a warm teasing at times about my naivety about what “real life” is like  🙂    I couldn’t have enjoyed my time with them — or anyone for that matter — any more!  In fact, I got there at 1:30, and when I looked at my clock, certain it must be about 3:00, it was 5:00!  Plus, I wasn’t even ready to go then! 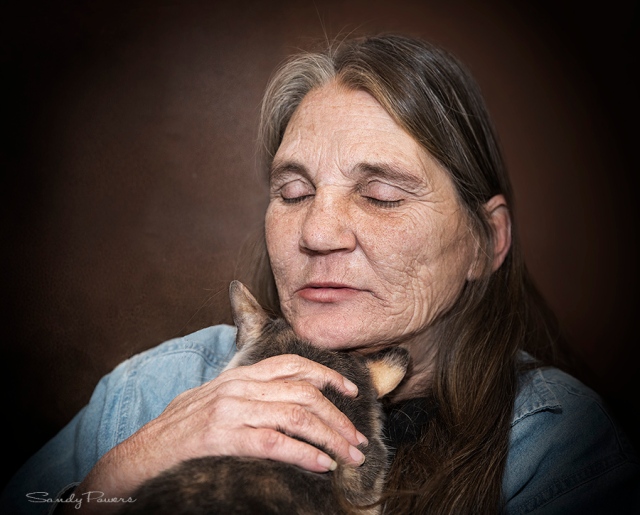 Barbara and her beloved, “Little Girl”

And… to make the day perfect, Marty, who wasn’t sure he could make it, was able to come by at the end of the day, so I got to meet him in person as well.  Now, I’m happy that we share social media on a daily basis.   Not surprisingly, he was fun, funny, had an AMAZING DJ voice!  And, he loves Barbara and Wayne like family.    I am so grateful to him for opening this door for me to be able to love and fit in — on the INSIDE — this world that has always called my name.  We’ve even talked about other opportunities in the future to take my camera and shine the beautiful light of God’s love to others in their world that just may not fully realize that YES!   They truly are the face of people who God considers His beloved, like Barbara and Wayne — doing what they do to Jesus, even if they don’t know it!  “Truly I tell you, whatever you did for one of the least of these brothers and sisters of mine, you did for me.”  Matthew 25:40

Marty!  No one gets away without kitty cuddles!

I had to!  That coffee-can-for-one was so cozy, but her brother was bound and determined all day to get in there with her.  TOOOOO cute not to celebrate!

I'm Sandy Powers, full-time photographer, doing what I love with my life! My passion is PEOPLE! There is such artistry in people, and I love capturing it. Naturally, portraiture is my passion, but I also love shooting for the art of photography for competitions or exhibit. I once watched an interview with Kim Walker, a well-known Christian worship leader. What she said resonated with me and pretty much describes my own story. In the interview, she said she didn't have to force things to happen for herself. She didn't have to push. She didn't have to overly promote herself or call people and beg them to hire her. In fact, she didn't have to do anything except keep her eyes on Jesus and watch Him bring her destiny to her. That's exactly how I feel. I walk each day by faith, and my eyes are on Him! I have watched in amazement as He has orchestrated circumstance to bring my destiny to me. I thank Him daily for allowing me to not only do what I love, but to use what I love to bless others! So, how is "the destiny" unfolding? Well. . . . My work has been juried into temporary museum and art gallery exhibits, I have been featured in Outdoor Photographer Magazine, my portraiture and fine art have won several awards in national and international competitions, and one of my portraits was selected by an Adobe Lightroom blog as one of the top 50 most stunning black and white photos. I'm a member of Professional Photographers of America and the Texas Photographic Society. Anything else??? Send me a note (Sandy@SandyP.net) any time! I LOVE meeting new people, sharing stories, and best of all, changing the "ordinary" to extraordinary through photography!
View all posts by Sandy →
This entry was posted in Fine Art, Lifestyle, PEOPLE, Portraits. Bookmark the permalink.

2 Responses to The Face of God’s Beloved